The Iqama – A Call to Prayer….Or Not! 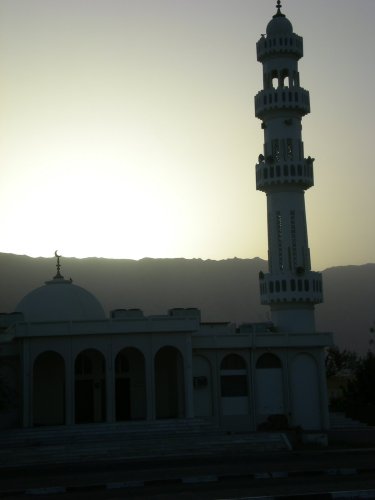 (A mosque just before sunset on the UAE side of the UAE/Oman border crossing)
WORSHIPPERS REPLACE SLEEPY IMAMS TO LEAD MORNING PRAYERS
Many do not turn up at the dawn, say residents, who blame it on laziness and a lack of motivation
By Samir Salama
Associate Editor of “The Gulf News”
Abu Dhabi – Worshippers complain that lazy imams are making them late for work and and sometimes someone from the congregation has to lead the early morning prayer because the inam is still sleeping.
“They are paid to lead the prayers five times a day and they are given accomodation near the mosques so they won’t be late for the prayers,” said one angry worshipper.
“Many times both the imam and the assistant are absent at the (fajr) dawn prayers,” said M. Kunhi, a worshipper.
“It delays everyone, especially if you have to catch a bus to go to work early,” he said. “Sleeping cannot be an excuse. There are many types of alarm clocks available. I think the Authority for Islamic Affairs should install punching machines at mosques to check their attendance.”
Ebrahim Abdul Baseer, another worshipper, said this is a big problem particularly in remote areas, where the imams feel they can get away with their laziness.
REPORT
“They do not have any motivation,” Abdul Baseer said. “Their problem is laziness.”
Another regular worshipper, Ali Ahmad Abdul Maqsood, said: “Last week the Imam missed the Fajr prayer. We were all standing in a line after the iqama (call to prayer) was made and we didn’t know what to do. We stood there for 35 minutes until we pushed one of us to lead the prayer.” He said mosques are empty in the mornings except for a few elderly people.
The General Authority of Islamic Affairs encourages worshippers to report any shortcomings in mosques and any suggestions. “Investigation is conducted into these complaints and those who prove guilty are punished. Penalties include salary deduction and termination of services,”said Mohammed Obaid Rashid Al Mazroui, Deputy Director General for Islamic Affairs and Endowments. He said the authority also conducts inspections of all mosques to check the performance of imams and muezzins and cleanliness of the mosques.