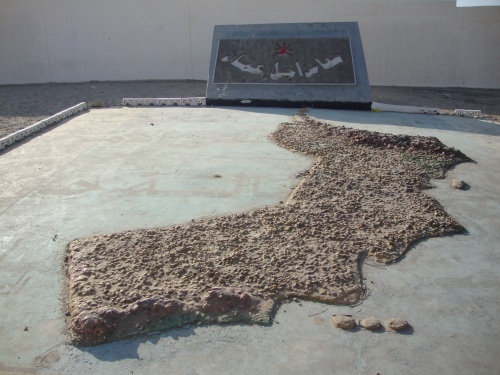 I really like this model of Oman that I saw in front of an unnamed school I visited recently.  (In Arabic it reads, “Together for the sake of Oman“.)  I like how there is an attempt to accurately show the mountain range heights instead of just making a flat model.  It got me thinking about this word, “model“.  Of course in this case it means “a miniature representation” but then again, it can also mean “something taken as worthy of imitation“.  How true of Oman for the countries in this region!  We have Yemen (which seems to be stuck in the stone ages) to the southwest of Oman in conflict with religious fanatics in recent days.  Then, we have Saudia Arabia which is extremely intolerant of other religions to the west and Iran across the Gulf of Oman to the northeast which is seeking nuclear weapons and vows to wipe Israel off the map.

Oman, on the other hand, “has been ranked as the second most peaceful Arab country (Qatar is 1st) by the highly rated Global Peace Index 2009 (which you can see here) and 21st in its rankings of 144 countries.  The rankings were based on data collated by the renowned Economic Intelligence Unit (EIU), which took into account such indicators as political stability, crime levels, defence outlays, size of the prison population, and so on.”  This quote is from an article that you can read in full here.

The neighbors of Oman could definitely look to the “model” of Oman.  Freedom, security,  and a peaceful lifestyle- O MAN!