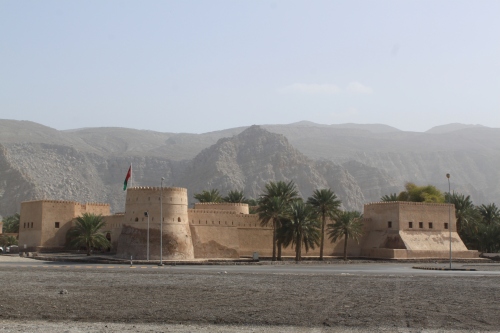 “The Musandam Peninsula is the smallest and most northerly region of Oman, covering an area of approximately 3,000 square kilometers.  It is separated from the rest of the country by the United Arab Emites (UAE) and its rocky headland juts out into the Straits of Hormuz, giving it strategic dominion over one of the busiest shipping lanes in the world.  The population of the Peninsula is approximately 30,000 with the greatest concentration of people living in Khasab, the capital.” 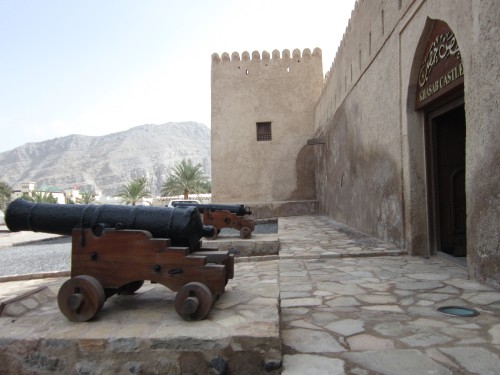 Khasab Castle is one of the major tourist attractions in Musandam.

“A picturesque fort on the inner cove of Khasab Bay overlooks the harbour and represents Khasab’s eastern line of defence.” 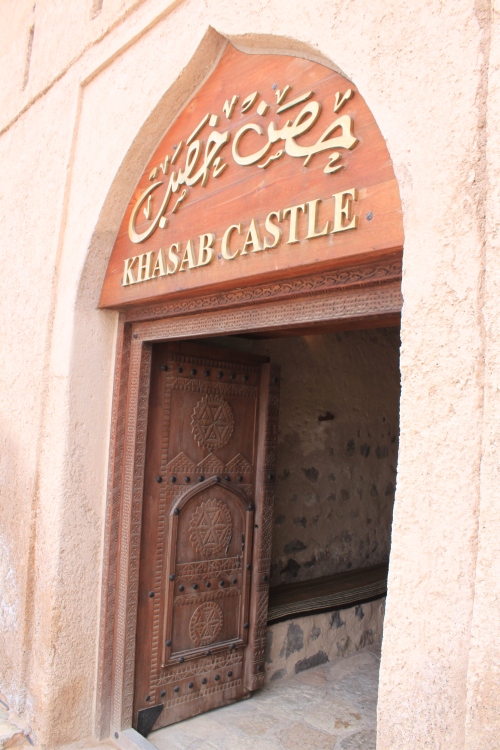 “Contained within its low, crenellated walls is a massive central tower (pictured here) that predates the fort itself and preceded the arrival of Portuguese in the 16th-century.”

For the sake of tourists, Khasab Castle (like many of the main forts and castles in Oman) has rooms with signs posted in Arabic and English, informing visitors of their use in ancient times (such as this Coffee-Making Room).  They are arranged in such a way that as you enter each room, you feel like you’re stepping back in time to experience a more traditional way of life.

“A Portuguese garrison occupied the site until 1644, when Imam Nasir bin Murshid Al-Ya’rubi united Oman’s land forces and, supported by strengthened naval forces, regained control of the coast.  The fort was renovated by his successor, Saif bin Sultan Al-Ya’rubi in the latter half of the 17th century, and was used as a strategic outpost by the rulers of the Al Bu Said dynasty in the centuries to follow.” 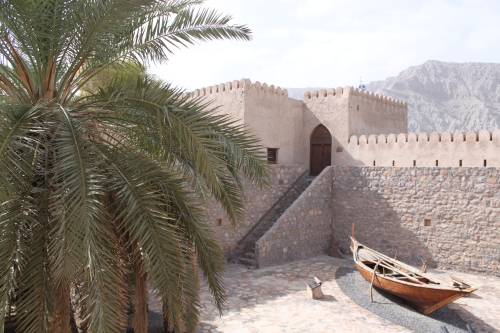 “Khasab Fort is open all year round to visitors from Saturday through Thursday, 9:00am to 4:00pm, and on Fridays from 8:00am to 11:00am.  Traditional Musandam boats and houses are on display in the castle courtyard, and additional exhibits are being developed in the central tower and residential wings to showcase the heritage and culture of the region.” (from “The Concise Guide to Musandam“, Ministry of Tourism)

Here’s a nice layout of the fort/castle which is one of many great items on display in the central tower museum.

“Khasab Castle first entered the annals of history when an Admiral of the Portuguese fleet, Ruy Freire da Andrade, used it as a base in his attempt to recapture Hormuz, in 1624.  The attempt failed, and it was not long before the Portuguese were forced to leave the region.” (from “Khasab Castle: Experience History” pamphlet, Ministry of Tourism, researched and written by Dr. Patricia Groves (a fellow Canadian living in Oman!))

One room on display is the regional “Wali” or Magistrate’s office from years ago. 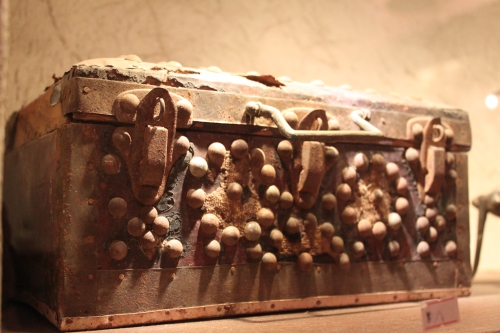 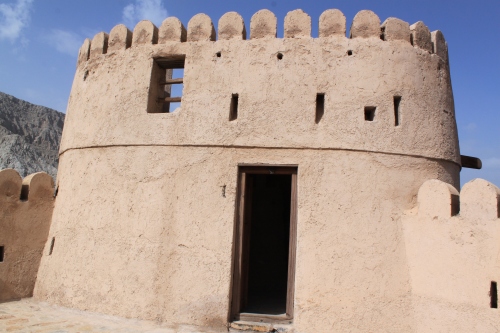 I really enjoyed walking around Khasab Castle and learning all about the distinct Musandam culture and the local population’s reliance on the ocean and trading history with Persia (or Iran) over many centuries.  I disagree with the book “Oman Off-Road” which reads (in describing Khasab Fort), “Unless you are a serious history buff, Khasab Fort is nothing special, but its setting, dominating the coastline near the older part of Khasab, is impressive.  Best seen from the sea, its design and structure make it similar to forts in the rest of Northern Oman.”  I’m glad I ignored their advice and chose to see the place for myself! Khasab Castle and its exhibitions throughout the courtyard and various rooms offer real insight into regional culture.  There is plenty to see and do there.  If you ever make it to Khasab, don’t just drive by this gem of a site!