Is “The Lost City of Ubar” Found or Still Lost?! Shisr, Southern Oman

As a HUGE fan of the Indiana Jones films (at least “Raiders of the Lost Ark” and “Indiana Jones and the Last Crusade“), myths or legends of “a lost city” are definitely something which are sure to grab my attention.  I had no intention of visiting the site of the supposed “rediscovered lost city of Ubar” during my trip to Salalah in July but memories of lost treasure being discovered in different movies on the big screen won out as I noticed this sign on the Salalah-Muscat road:

I noticed that the road here to Shisr (or Shasar) was reported to be only 70 kms so I decided that it might be well worth arriving in Muscat a few hours later than planned in order to see an ancient city shrouded in mystery.

This was what the road was like to “the lost city of Ubar”.  What you can’t see from this picture is just how bumpy the road was!  In the classic storybook, “1001 Arabian Nights“, “Anyone who tries to find the road to Ubar will go crazy.”  Well, I seemed to be losing my mind from the car vibrations and halfway there I started doubting if I was even on the right road!  The shaking of the car was so bad in some spots that I had to slow down to 20 kms/hour to prevent the rental car from falling apart! (Good thing I left my car in Muscat on this journey, haha!! 🙂 ) 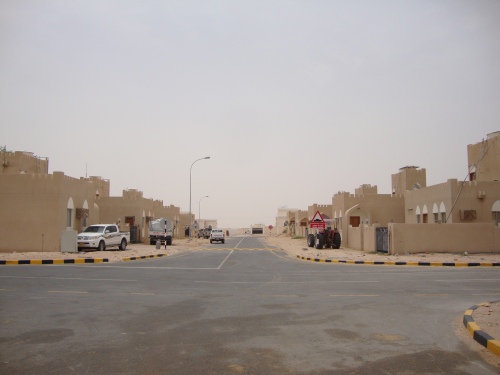 A few villas have been built since the discovery of this site in 1992.  There couldn’t have been more than 10 villas there in total as well as a small mosque and a tiny convenience store. 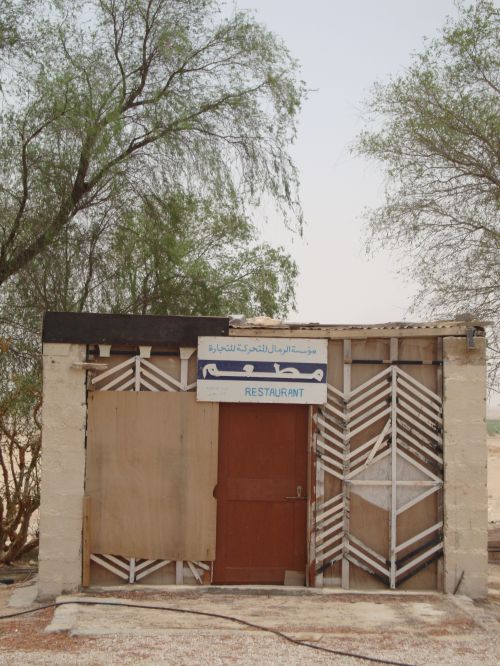 Oh, I almost forgot to mention the restaurant.  No thanks, ha!ha! I’m not THAT hungry…

Seems that the black paint can is lost as well!

This location is recognized as a UNESCO world heritage site.  One might automatically assume that that would mean it would be impressive, but one would be wrong.  The same with the “Bat Tombs” outside of Ibri…

Of course for the sake of tourism, this site is CLAIMED to be “the ancient city of Ubar” but there is a lot of debate out there about whether it is or not.  If it is the “Iram” of the Quran, it really doesn’t seem to match at all (even though many Islamic sites hold this discovery as proof of the validity of their book).  This is the verse said to describe this site in the Quran: “Seest thou not how thy Lord dealt with the `Ad (people); Of the (city of) Iram, with lofty pillars; The like of which were not produced in (all) the land?”  (This story sounds suspiciously a lot like the story of Sodom and Gomorra which were punished/destroyed by God in the Old Testament.)  Well the ruins of this site show that this ancient site was anything but “lofty”.  One traveler who traveled all the way out to see this site wrote on the web, “The lost city of Ubar is disappointing-It should stay lost.” Strong words but I can understand the disappointment as there really was not much to see. The other ancient sites of Khor Rhouri and Al Balid are FAR superior to this site which is supposed to have been “the best of the best”.  Built by the legendary Shaddad ibn Ad as “an imitation of Paradise,” the city was renowned for its imposing architecture, vast groves of fruit trees and fabulous wealth. The historian, Al-Hamdani, writing in the sixth century A.D., hailed Ubar as “first among the treasures of ancient Arabia“.  It seems that some false advertising is going on.  Some websites (go ahead and google to see for yourself) are honest enough to state that it is probably not the ancient city reported.

Here’s another interesting report on this historic site.

Are these the ruins of what T.E. Lawrence (“Lawrence of Arabia”) once referred to as “the Atlantis of the Sands”?  You be the judge.

Some are satisfied with the notion that this site (Wubar, Shisr) is just one of many ancient stops/forts along the frankincense trail but not the actual “famed city of Iram”. Juris Zarins, one of the original archeologists basically admits to this fact in an interview NOVA did with him years later.  Zarins Interview Part I.  Part II.

An animal’s skull (goat? sheep?) on a dark stairway.  This is the kind of scene I imagined in my adventure of looking for a lost city, ha!ha! (I’ve obviously watched one too many movies!  🙂 )  By the way, come explore this dark stairway with me in my short film, “Andiana Jones and the Search for the Lost City of Ubar“, coming soon to a theatre near you. 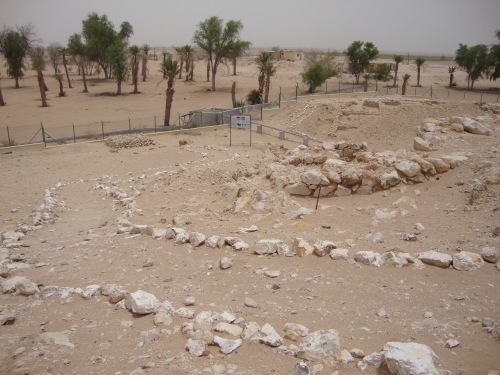 The white stones lay out a path which the visitors are to follow full-circle around the small area. 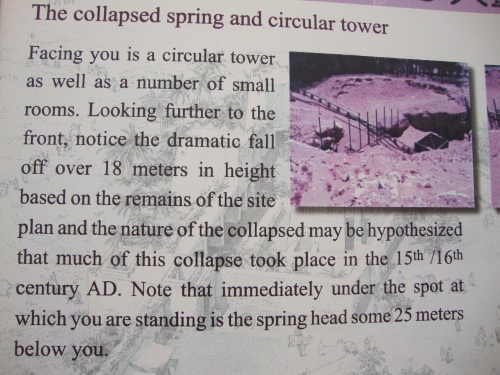 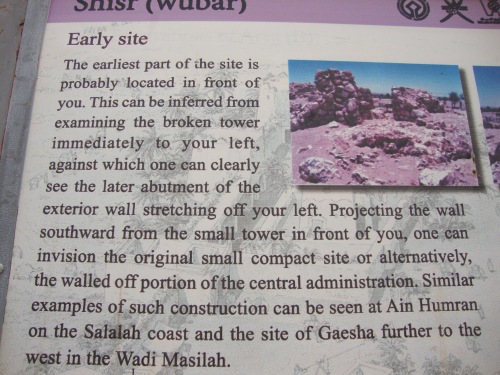 An old (but not exactly “ancient”) building on the Wubar site.  The Indian clerk at the small shop, when asked, told me that “the previous Sultan lived in it” but that is utter rubbish.

Eureka! I have found the fabled lost toilet of Ubar!!!  Sorry…just having fun with you, ha!ha!  🙂

This gentleman, Babu, has worked at the small shop selling snacks just outside the gate to “the lost city of Ubar” for 7 years! Wow! poor guy! There really isn’t much to do there, it’s extremely hot (far from the Monsoon Rains that reaches Salalah every July-September) and seems to be far from civilization.  If there’s one thing I got out of my trip to Ubar, Shisr, it’s the realization of how great life is in today’s modern cities.  Count your blessings, people! The average person of today’s world lives far better than many kings in ancient days!  Check out this eye-opening video from Bill Whittle on “The Wonders of the Modern World“.

By the way, if you want to see some real “lost cities” worth visiting, click here.

21 responses to “Is “The Lost City of Ubar” Found or Still Lost?! Shisr, Southern Oman”